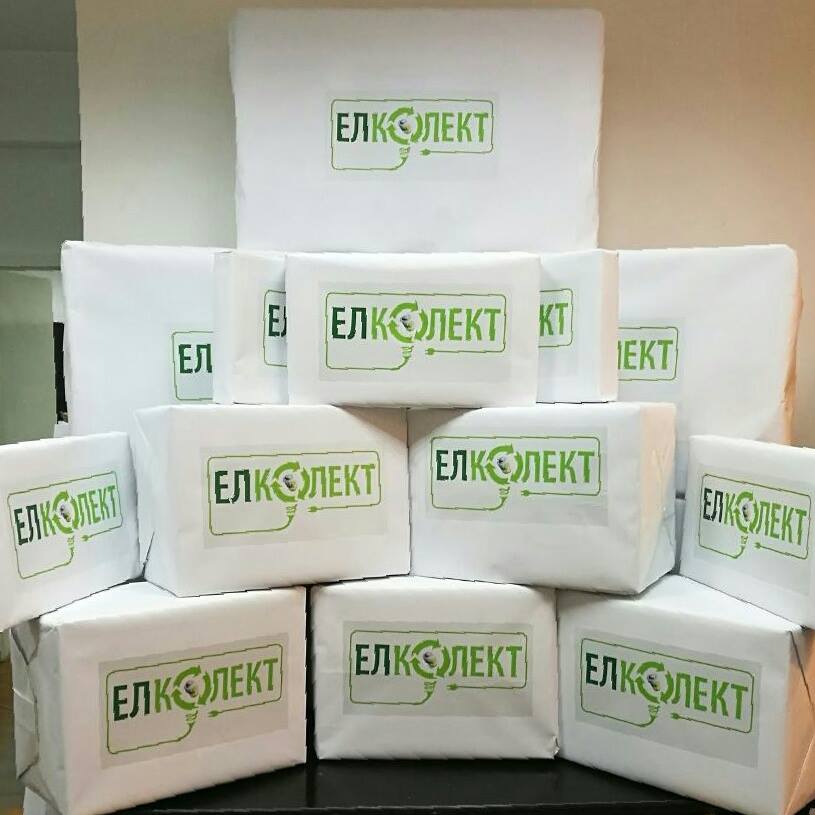 The 15 prize coupons were drawn, for the participants who left electrical and electronic waste in the eco warehouses of Elkolekt, in the municipalities of Gjorce Petrov, Karpos, Berovo, Gevgelija and Bogdanci during the prize game.

In the five municipalities on December 26, 2016, suitable events were organized, attended by part of the participants, a team of municipalities and representatives of Elkolekt.

A great interest from the citizens, constructive cooperation with municipal team and support from the mayors, this is hot the representative from Elkolekt team summed up the action through which it was designed to encourage and reward the conscientious citizens for the proper management of electrical and electronic waste in the municipalities Gjorce Petrov, Karpos, Berovo, Gevgelija and Bogdanci. The Elkolekt Prize Game “Let’s Recycle and Get Rewards” started on November 28, 2016 and ended exactly in the holiday period of the year, a gift time.

Fana Hristovska, managing director of Elkolekt, said that she was satisfied with the result of the winning game and the cooperation with the municipalities, pointing out that this type of action is of paramount importance for education and awareness raising among the citizens on the need for waste selection with an emphasis on special waste stream as the electronic and electrical waste. She thanked the citizens of the five municipalities that took part in the prize game, they directly contributed to reducing the harmful impact on the environment and the health of people from this type of waste.

In some of the municipalities, the mayors attended these convenient events.

Dragi Nadzinski – Mayor of the municipality of Berovo addressed the positive cooperation with Elkolekt and expressed his satisfaction with the successful action, emphasizing the high level of environmental awareness among his fellow citizens as well as the understanding of the importance of primary waste selection.

The reward drawings in the five municipalities were conducted in each municipality separately, in premises determined by the municipality, and supervised by a three-member commission composed of two members from the respective municipality and one member from Elkolekt In each of the five municipalities, appropriate events were organized, attended by some of the participants. The coupons obtained for left electric and electronic appliances in the lkolekt warehouses were withdrawn during the duration of the prize game. Participants who were present at the draw and had the other part of the coupon with the extracted number, had the opportunity to raise their prize immediately. Participants who did not attend the drawings, and their voucher with the ordinal number is in the results of the drawing, have the opportunity, by January 31st, to call their municipality or Elkolekt and get their prize. Raising the awards is done with the other part of the coupon – as proof and with a personal identification document.

RESULTS FROM THE PRIZE GAME “LET’S RECYCLE AND GET REWARD”

THE MUNICIPALITY OF GJORCE PETROV

THE MUNICIPALITY OF GEVGELIJA

Exactly in this nice festive period, Elkolekt added extra joy. The most successful were the winners of the prize-winning coupons that attended the draw and immediately picked up the prizes.

Through the prize games and socially responsible activities organized locally, the company Elkolekt wishes to thank the citizens who leave their electrical and electronic waste at the prescribed places, and at the same time to encourage the others to release this type of waste from their domestic or business premises, reminding the necessity of preserving the environment and human health.

December 27, 2016
We use cookies on our website to give you the most relevant experience by remembering your preferences and repeat visits. By clicking “Accept All”, you consent to the use of ALL the cookies. However, you may visit "Cookie Settings" to provide a controlled consent.
Cookie SettingsAccept All
Manage consent