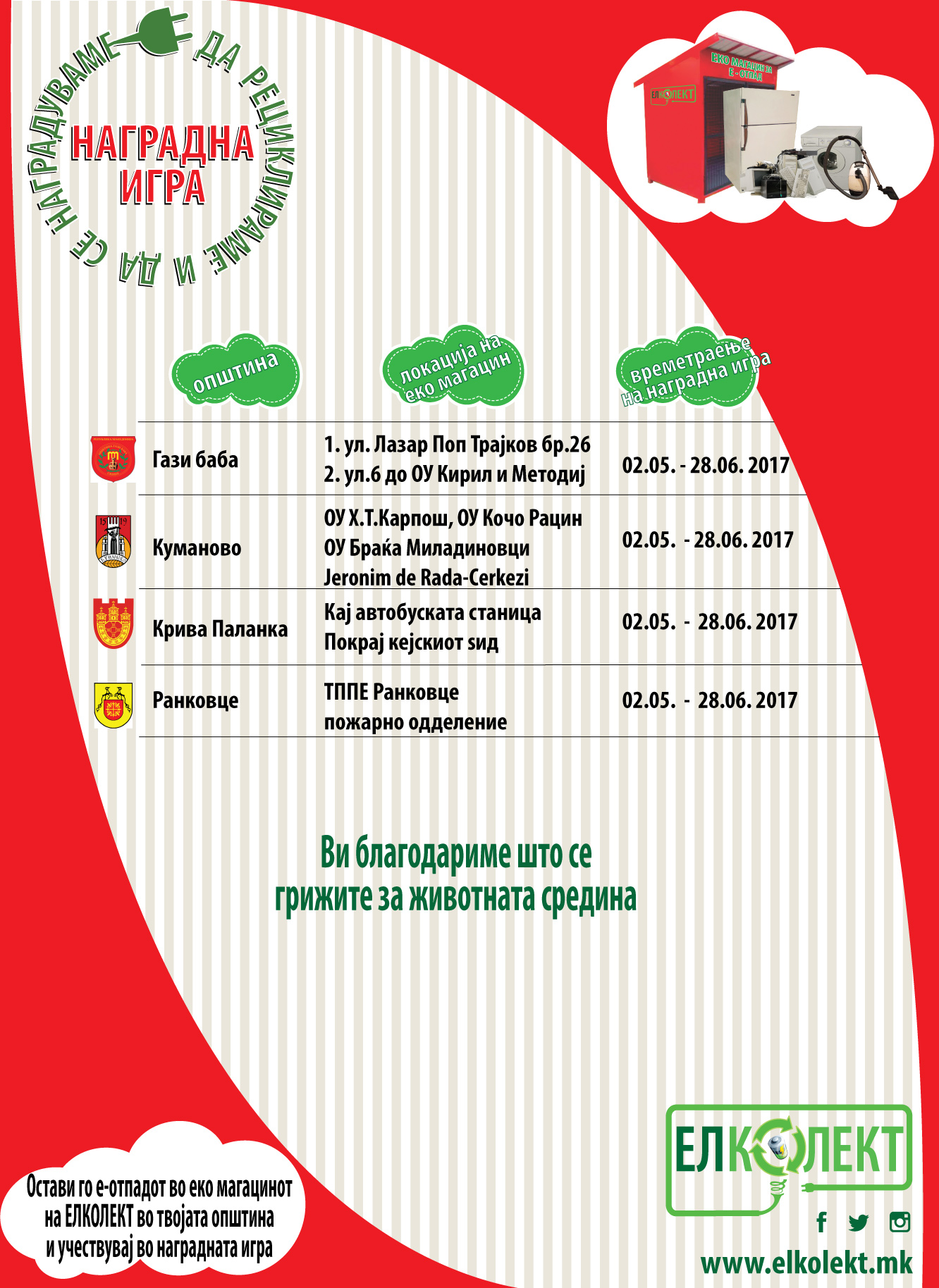 ELKOLEKT STARTS WITH A NEW CYCLE OF THE PRIZE GAME “LET’S RECYCLE AND GET REWARD” – After last year’s eco-action successfully realized in the Municipalities: Gjorce Petrov, Karpos, Berovo, Gevgelija and Bogdanci under the motto “Let’s recycle and get reward”, which resulted in Elkolekt decided to continue its activities this year in the same direction – Elkolekt DOO of the inhabitants of the municipalities: Gazi Baba, Kumanovo, Kriva Palanka and Rankovce in the period from 2 May to 28 I’m going to take them (LED TV, camera, smart phone, DVD or toaster) – to the residents of Gazi Baba, Kumanovo, Kriva Palanka and Rankovce waste electrical and electronic appliances can bring valuable prizes – Every adult citizen who will deliver a waste electric or electronic device in one of the eco warehouses of Elkolekt located in the territory of the aforementioned general and becomes a potential winner of a valuable prize. With the increase in the number of delivered waste appliances, the possibility of obtaining a reward increases.

“The company Elkolekt in cooperation with the municipalities on the territory of the Republic of Macedonia, where the recognizable red eco warehouses of Elkolekt has been installed, has already established a practice for rewarding the conscientious citizens responsible for the release of electrical and electronic waste, and in addition to preserving the living environment and human health. The new prize game, organized by Elkolekt under the already recognizable motto “”Let’s Recycle and Get Reward””, in cooperation with four municipalities on the territory of the Republic of Macedonia will take place in the period from May 2 to June 28, 2017. For the prize game Elkolekt provided a total prize pool of 20 valuable prizes of which: four LED TV, four cameras Sony DSC W800B, four Gigabyte smartphones G Class – LTE, Dual Sim, 5.00″” HD IPS (1Z80 * 720 pix ), four Pioneer DVDs 2242 and four toasters Hyundai SM626 (five awards each in four listed municipalities). Potential winner of one of these five valuable prizes is every adult citizen who will deliver electric or electronic waste at the location where the eco warehouses are placed on the territory of the said municipalities during the prize game. For each piece of electric and electronic appliance delivered to one of the eco warehouses of Elkolekt one will receive a rewarded coupon for participation in the prize game. The coupon in which the ordinal number is inscribed and contains a stamp from the organizer is composed of two identical patrs. One part of the coupon retains the participant as proof of participation in the prize game, and the other part of the coupon should be placed in a sealed box from which the lucky winners will be drawn. It is important to note that certain types of waste electrical and electronic products carry two coupons: large home appliances; equipment for information technology and telecommunications; consumer electronics and consumer electronics, TV, electric and electronic tools and electrical and electronic toys and equipment for entertainment and sports. Starting from this action for the delivered five waste lamps, one reward coupon is received. For each individual left appliance, the participant in the prize winning game receives one coupon. By adopting a larger number of appliances, an appropriate number of coupons is obtained, whereby the chance of reward increases. Certain types of equipment and accessories carry two coupons: large home appliances; equipment for information technology and telecommunications; consumer electronics and consumer electronics, electric and electronic tools. The results of the drawing will be published on the website of Elkolekt, www.elkolekt.mk and on the website of your municipality. Locations of the eco warehouses of Elkolekt in the municipalities where the prize game will be organized is: In the municipality Gazi Baba – Lazar Pop Trajkov No. 26 – Avtokomanda and 6 – Stajkovci Street (near the “”Kiril and Metodij”” Primary School) 2. Municipality of Kumanovo – Primary School “”H.T. Karpos””, Primary School “” Koco Racin “”,”” Miladinov Brothers “”Primary School, Jeronim deRada – Cerkezi 3. Municipality of Kriva Palanka – Pocpaj quay wall on Kriva river, near the bus Tank 4. Municipality of Rankovce: TPPE Rankovce – fire department. With the help of Elkolekt DOO all citizens who have waste electrical and electronic appliances such as computers, monitors, processors, electric cookers, stoves, irons, mixers, juicers and similar and bring them to certain locations during the duration of this action in their municipality, in addition to having the opportunity to get rid of electrical and electronic waste from their homes, they have the opportunity to become potential winners of one of the five valuable prizes. The company Elkolekt in cooperation with the municipalities: Gazi Baba, Kumanovo, Kriva Palanka and Rankovce, is implementing this action by rewarding the conscientious citizens in order to raise the public awareness about the manner in which this type of waste should be stored, bearing in mind that the electrical and electronic waste contains dangerous materials harmful to human health and the immediate living environment, as well as for the reason that it is forbidden and punishable to throw this type of waste together with the rest of the municipal waste. Through the prize games and socially responsible activities organized locally, the company Elkolekt wishes to thank the citizens who leave their hazardous waste in the prescribed places, and at the same time to encourage the remaining ones to remove the hazardous waste from their domestic or business premises, recalling the necessity for the preservation of the environment and human health. During this year, Elkolekt plans to realize new actions and award-winning games in other municipalities with which it cooperates in the field raising public awareness among citizens about the need for proper treatment of WEEE and WBA. “ 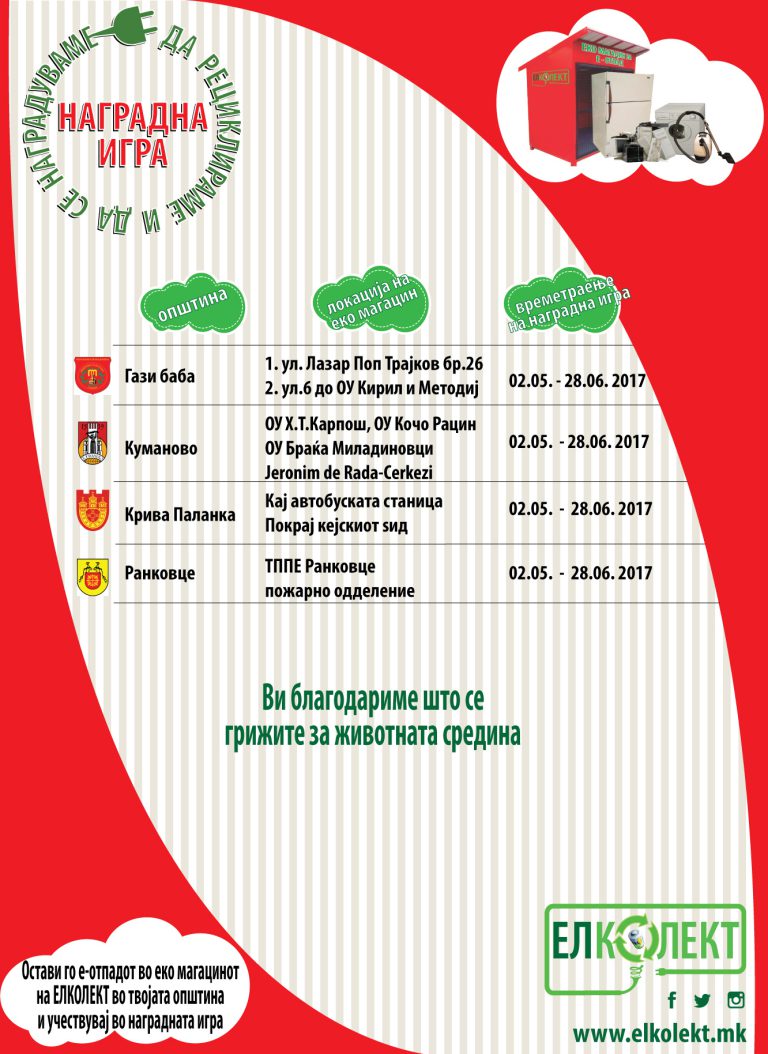 Winner of the “Creators of the century” award

September 24, 2018
We use cookies on our website to give you the most relevant experience by remembering your preferences and repeat visits. By clicking “Accept All”, you consent to the use of ALL the cookies. However, you may visit "Cookie Settings" to provide a controlled consent.
Cookie SettingsAccept All
Manage consent